Lake Superior Ice Festival Canine King & Queen and Felines of the Festival Contests Were a Hit for the Second Year in a Row!

Cheri Fitch
Thank you again to all those who nominated their pets and voted for our community pets throughout the Lake Superior Ice Festival Canine King & Queen and Felines of the Festival contests!  As always our community of animal lovers has exceeded our wildest dreams and raised over $7,000 during this fun and competitive event!
Canines lined the walkways on Saturday, January 29th, at the Ice Festival waiting to see the 2022 crowning of the Canine King and Queen!  The winners Jito, a 15 year old Pomeranian, and Lupine, a 2 year old Border Collie took the stage at 1:15 PM accompanied by the Sterling Silver Dance Studio princesses who assisted in this Royal Coronation Ceremony.  While the crowns didn’t last long the winners looked very regal while they wore them! The crowd was very large and was accompanied by many canines!
During this ceremony our Feline winners were also recognized, though they were not present.  Both felines parents took pride in accepting their awards and learned that the Humane Society of Douglas County, Inc. ice sculpture, located at 138 Moccasin Mike Road, has the winning felines photos infused in them in lieu of receiving crowns.
Be on the lookout for the 2023 Lake Superior Ice Festival Canine King & Queen and Felines of the Festival starting on January 1, 2023. 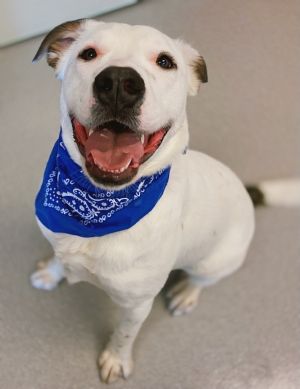 This adorable boy is Roscoe! Roscoe is a 1 year old, Pitbull Mix available for adoption! He is an absolute... View full description »